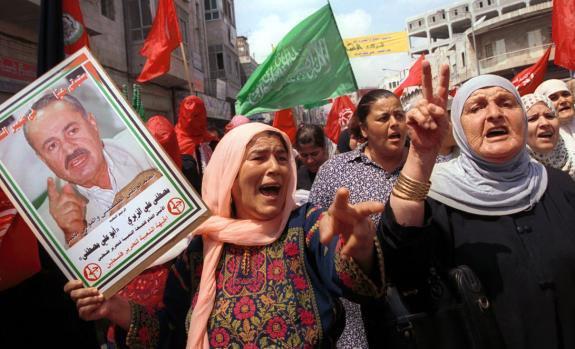 The Popular Front for the Liberation of Palestine (PFLP) mourns the death of its leader, the general secretary, Abu Ali Mustafa, who was assassinated by the Israeli army on the morning of 27 August 2001.  Abu Ali Mustafa, the head of the second largest group within the Palestine Liberation Organization (PLO), was murdered by Sharon and his government.  Sharon, however, acts with the full support and backing of the U.S. administration who bears full responsibility for the new escalation in the Middle East, due to its uncritical, unconditional, and blind support of the Israeli occupation of Palestinian lands.

Born in Palestine in 1938 in Arraba, near Jenin, Abu Ali lived most of his adult life in exile until he returned home in 1999.  He was part of the resistance movement against the Israeli occupation and fulfilled his duties from abroad as well as from Palestine.

In representing the PFLP, Abu Ali understood clearly his role and the role of the PFLP in expressing a radical humanistic vision for the Middle East problem.  He was adamant and articulate in presenting this vision and loyal to the principles of the party.  He defended the Palestinian cause and the inalienable rights of the Palestinian people, foremost among them, the right of refugees to return and the right to establish a sovereign and independent Palestinian state with Jerusalem as its capital.  He called for the dismantling of all Israeli settlements and for continuing the Palestinian resistance movement until the Israeli occupation is brought to an end.

He presented the vision of an all-encompassing Palestinian state where people would live together in freedom regardless of their race, religion, or color. He called for a true democratic society where the rights of the majority are protected by the fulfillment of the rights of the minorities.  He called the Palestinian resistance movement against the Israeli racist, colonialist occupation, a duty for every Palestinian and for every person who believes in equality, justice, and peace.

As the PFLP, and all the Palestinian people, mourn its leader, the PFLP vows to continue the Intifada and the Palestinian resistance movement until the Israeli occupation is over.

The Life of Abu Ali Mustafa

In April 1957, he was arrested and imprisoned for several months, shortly after the Jordanian parliament was dissolved and the Solemn Nebulas government was dismissed.   During that time, political parties were banned and Abu Aliwas arrested again with many others who were tried in a military court.  He was sentenced to five years in Jafer Prison in east Jordan.

After being released from prison in 1961, Abu Ali Mustafa continued his political work with the Arab National Movement and became responsible for the Northern District of the West Bank.  He founded and built two organizations, one public, and one underground.

In 1966, Abu Ali was arrested again during a widespread operation organized by the Jordanian government against the Arab National Movement.  Abu Ali was imprisoned without trial for several months in Search Prison in Jordan.

After the 1967 War, Abu Ali Mustafa joined Dr. George Habash in forming the Popular Front for the Liberation of Palestine.  He led the first commandos through the Jordan River inside Palestine and started forming the underground body of the PFLP.  The Israelis searched in vain for him while he was hiding out in the West Bank.  After several months, he secretly returned to Jordan.

In addition to being responsible for the PFLP in the West Bank, Abu Ali Mustafa became the commando-in-chief of the PFLP military forces (including the period comprising the battles in Amman in September 1970 and the battle of Aglow in July 1971).  Afterwards, he left secretly for Lebanon.

In 1972, at the Third National Conference of the PFLP, Abu Ali was elected deputy general secretary.  From 1987 until 1991 he was a member of the Executive Committee of the PLO.