Workers World Party (US): Statement on the Assassination of Abu Ali Mustafa 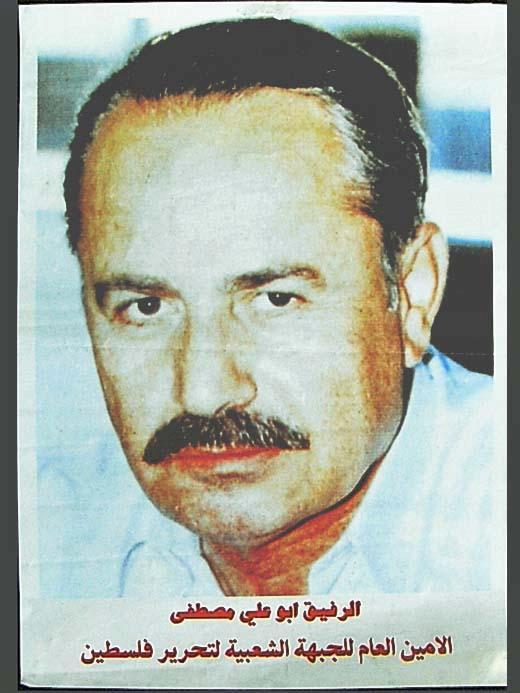 Workers World Party (US): Statement on the Assassination of Abu Ali Mustafa

Statement on the assassination of comrade Abu Ali Mustafa

General Secretary of the Popular Front for the Liberation of Palestine

From the National Committee of Workers World Party on Aug. 28:

The National Committee and members of Workers World Party (U.S.) extend our deepest condolences and solidarity to the family and comrades of Mustafa Al-Zibri, widely known as Abu Ali Mustafa, General Secretary of the Popular Front for the Liberation of Palestine (PFLP).

The life of Comrade Abu Ali Mustafa was one of heroic courage and relentless determination to win liberation for the Palestinians and all Arab people. His death is a heavy blow to his family, his organization and to the Palestinian cause. The massive outpourings of mourning and anger in Lebanon, Jordan, Syria, inside occupied Palestine and elsewhere, testify to the people’s love and respect for this historic leader.

The vicious and cowardly murder of Abu Ali Mustafa, killed at his desk in Ramallah on Aug. 27, 2001, was an act of state-sponsored terrorism by the Israeli government of war criminal Ariel Sharon. This assassination, for which the Israeli government proudly takes credit, was carried out by means of U.S.-supplied missiles fired from a U.S.-supplied “Apache” helicopter, as has been the case in most of the more than 60 assassinations carried out by Israel over the past 11 months.

Not only has the U.S. government supplied the high-tech weaponry of death to Israel, it has also provided the political/diplomatic support and cover for Israel to carry out its policy of state murder. Just a few weeks ago, Vice President Cheney expressed his “understanding” for Israel’s policy of assassination. The U.S., upon which Israel depends for billions of dollars annually in military and economic aid, has given the Israeli occupiers the green light to carry out a policy of unlimited brutality against the Palestinian people.

While U.S. government officials never tire of hypocritically preaching to the world about “terrorism,” the assassination of Abu Ali Mustafa demonstrates once again this simple fact: The number one terrorist in the Middle East today is U.S. imperialism, which, directly or through its surrogate regimes, has slaughtered millions of people, from Iran to Iraq to Palestine and more, in its relentless quest to subjugate this key strategic region. The assassination of Abu Ali Mustafa was another grave violation of
international and U.S. law. U.S.-supplied weaponry is supposedly to be used only for “defensive” purposes. But neither U.S. government officials nor the corporate media are likely to even touch this issue. The U.S. and Israel have been pardoned, in advance, for any violations of international legality by the U.S. “free press.”

Over the past half-century, Israel–funded and supplied by the U.S.–has killed tens of thousands of Palestinians, driven hundreds of thousands into exile, subjected hundreds of thousands more to systematic torture, imprisonment, homelessness, deprivation and racist abuse. The aim of U.S./Israeli policy has been not only to defeat the Palestinians, but to destroy them as a people. There is a word for this, and that word is genocide. But the ruthless U.S./Israeli attempts to crush the Palestinians and erase their name from the world’s vocabulary have not succeeded and will not succeed. Nor will the despicable assassination of Abu Ali Mustafa diminish the people’s struggle – just the opposite.

Now is the time for working class and progressive forces around the world to redouble active solidarity with the heroic Palestinian people. The Palestinians are today in the vanguard of the struggle against corporate globalization and imperialist domination. The Palestinian struggle is truly the struggle of all oppressed humanity.