After assassination, Outpouring of anger and support for Palestinian struggle 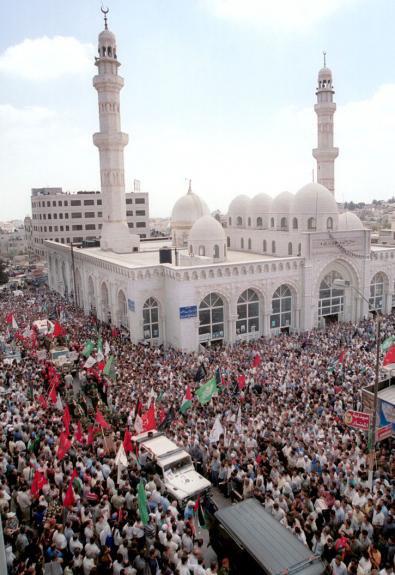 After assassination, Outpouring of anger and support for Palestinian struggle

abuali 13th Sep 2001 No Comment in About Abu Ali Mustafa

The Israeli Army assassinated Abu Ali Mustafa, general secretary of the Popular Front for the Liberation of Palestine, on the morning of Aug. 27 as he sat at his desk in Ramallah, Palestine. The murder weapon was a U.S.-supplied attack helicopter, which fired two missiles into his office.

Three other people were wounded in the assault on the building, which housed more than 50 residents.

The cold-blooded killing of Abu Ali Mustafa evoked a massive outpouring of grief and anger in several Middle East countries, as well as an escalation of the Palestinian armed resistance movement fighting Israeli occupation. A three-day period of national mourning and general strike was declared by the leadership of the Palestinian Authority.

More than 50,000 joined a militant funeral march in Ramallah on Aug. 28, despite the near total sealing off of West Bank and Gaza cities and towns by the Israeli army. A PFLP military honor guard accompanied the coffin, while the chant “Abu Ali Mustafa-Your blood will not be wasted,” rang through the streets. Demonstrations were held in many other Palestinian cities on the same day.

Tens of thousands marched defiantly in the Ein al-Hilweh, Bourj al-Bourajaneh, Shatila and other Palestinian refugee camps in Lebanon. Lebanon Information Minister Ghazi Aridi, speaking at the Mar Elias refugee camp, said: “We are overwhelmed by the feeling that the orders for assassinating Palestinian leaders, destroying infrastructure and hitting at the Palestinian people come from the White House. They are American orders carried out in Israel.”

The Lebanese Communist Party issued a statement saying, “Washington keeps encouraging the butcher, Israeli Premier Ariel Sharon, to continue to liquidate Palestinian leaders.” More than 20,000 Lebanese and Palestinians had been killed in Israel’s 1982 invasion of Lebanon, carried out under Sharon’s direction.

Yarmouk, the largest Palestinian refugee camp in Syria, was shut down by a strike and mass protest of more than 10,000 people. All Syrian broadcasting was interrupted on Aug. 27 to carry an announcement of the assassination.

In Jordan, 13 unions declared a strike on the day of Mustafa’s funeral and demonstrations took place in the many Palestinian camps in that country. Palestinian refugees and their descendants comprise two-thirds of Jordan’s population. At the Baqaa camp, protesters chanted, “No to an Israeli Embassy, no to an Israeli ambassador in Jordan.”

Abu Ali Mustafa was the most prominent of more than 60 Palestinian leaders and activists assassinated by the Israeli military since the new Intifada, or uprising, began 11 months ago.

The PFLP, which is usually slandered as a “terrorist” organization in the capitalist media, is the largest Palestinian Marxist party and has wide influence throughout the Middle East and beyond. In a statement released the day of his murder, the PFLP leadership said:

“Abu Ali Mustafa, the head of the second largest group within the Palestine Liberation Organization (PLO), was murdered by Sharon and his government. Sharon, however, acts with the full support and backing of the U.S. administration who bears full responsibility for the new escalation in the Middle East, due to its uncritical, unconditional and blind support of the Israeli occupation of Palestinian lands.

“Dear comrades! Although the loss of Abu Ali Mustafa seems too great to bear, you should not be discouraged. The PFLP has a solid history, strong party structures, and popular support to sustain it. Our struggle for freedom and independence continues! We will not surrender, and neither should you. Victory is coming!”

A life of political work and struggle

The PFLP statement was accompanied by a brief outline of the life of their slain leader:

“In April 1957, he was arrested and imprisoned for several months, shortly after the Jordanian parliament was dissolved and the Suleiman Nabulsi government was dismissed. During that time, political parties were banned and Abu Ali was arrested again with many others who were tried in a military court. He was sentenced to five years in Jafer Prison in east Jordan.

“After being released from prison in 1961, Abu Ali Mustafa continued his political work with the Arab National Movement and became responsible for the Northern District of the West Bank. He founded and built two organizations, one public, and one underground.

“In 1966, Abu Ali was arrested again during a widespread operation organized by the Jordanian government against the Arab National Movement. Abu Ali was imprisoned without trial for several months in Zarka Prison in Jordan.

“After the 1967 War, Abu Ali Mustafa joined Dr. George Habash in forming the Popular Front for the Liberation of Palestine. He led the first commandos through the Jordan River inside Palestine and started forming the underground body of the PFLP. The Israelis searched in vain for him while he was hiding out in the West Bank. After several months, he secretly returned to Jordan.

“In addition to being responsible for the PFLP in the West Bank, Abu Ali Mustafa became the commando-in-chief of the PFLP military forces (including the period comprising the battles in Amman in September 1970 and the battle of Ajloun in July 1971). Afterwards, he left secretly for Lebanon.

George Habash, founder and long-time leader of the PFLP and Mustafa’s predecessor, issued a statement that read in part:

“Today I received with great sadness the news about the assassination of the leader Abu Ali Mustafa by Sharon and his Zionist gang. This heinous crime that has robbed us of our long-standing comrade for over half a century, reaffirms that the Zionist enemy is determined to annihilate the leaders of our revolution and its cadres in order to force us to surrender.

“This enemy has apparently not learned the lessons of history. The enemy has not yet learned that the Palestinian people, who have offered hundreds of leaders and thousands of fighters, will not kneel in surrender. On the contrary, we will persevere in the struggle no matter how long it takes to regain our rights and the rights of our nation. We will remain steadfast in the struggle until the Zionist, colonialist project is defeated.

“On this day we remember Ghassan Kanafani, Guevara Gaza, Al Amassi, Abu Jihad, Abu Iyad, Faisal Husseini; and before them we remember Al-Qassam and Abd al-Qader Al-Husseini, and countless others who have fallen in the battle for Palestine. Their sacrifice and their memory motivates us to persevere.

“As I convey to our people and to the Arab Nation the loss of Abu Ali Mustafa whose determination, courage and strength distinguished him over so many years, I assure you that the shedding of his blood will not be in vain. His comrades and his people will inhale the strength of his soul and become stronger and more determined to continue the struggle for freedom and independence.”

Leaders of all Palestinian organizations met with Palestinian Authority President Yasir Arafat to pay tribute to Mustafa, and representatives of Fatah, Hamas, the Democratic Front for the Liberation of Palestine, and other organizations joined in the militant funeral march.

Solidarity from many countries

Messages of condolences and solidarity were sent from progressive and revolutionary organizations in many countries (see WWP message in this issue).

The Communist Party of India (Marxist) said that it “strongly condemns the dastardly assassination of Comrade Abu Ali Mustafa. The missile attack on the PFLP office at Ramallah targeting its leadership is the latest incident of the brutal aggression by the Israeli government. The real face of the Sharon government is seen in their heinous assassination program.”

The Workers Party of Belgium (PTB) pointed out: “Murdering Palestinian leaders and activists who oppose Israel’s policies is an act of terrorism that sharply contrasts with the Israelis’ democratic pretensions. … The escalation of Israel’s total war against the Palestinian people is leading to gradual re-occupation and a further colonization of Palestine, and shows that Israel does not want peace.”

Ziad Asali, president of the American Arab Anti-Discrimination Committee (ADC) in the U.S., said: “This latest assassination once again demonstrates Israel’s determination to use any method, no matter how brutal or illegal, to enforce its 34-year occupation of Palestinian lands and impose its will on the Palestinian people. It is this occupation which is the cause of the conflict.”