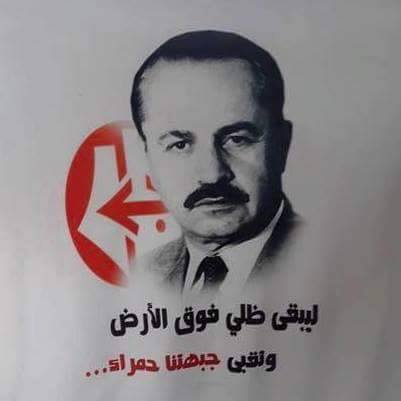 Today, August 27, 2005, marks the fourth anniversary of the assassination of our comrade and leader Abu Ali Mustafa, General Secretary of the Popular Front for the Liberation of Palestine (PFLP), a lifelong fighter for justice and liberation for the Palestinian people. Abu Ali Mustafa was murdered by the Zionist state, using a U.S.-made Apache helicopter to shoot two missiles directly into his Ramallah office. They believed that by assassinating a great leader, who had given his life to the struggle of our people, they could murder his ideas and commitment. This assassination was aimed not only at one steadfast leader, but at his front, at his cause, and at his nation, in its entirety. They could not, and will not, succeed in their task. The policy of assassination has been a consistent attempt to destroy the Palestinian nation, and it has never and will never succeed. Our martyrs and our leaders live on in our resistance, and Abu Ali Mustafa lives on with us today in our unbreakable commitment to his ideas, principles and cause.

This commemoration is accompanied by the recent Zionist defeat in Gaza. Their defeat is a result of the struggle of our people and their ongoing resistance, and it will empower and further encourage us to continue this struggle to fully end the occupation presence and control of Gaza – to liberate our borders, skies and water. We will continue the struggle to defeat the occupation of all of our land, and will continue our resistance until the occupier and the occupation are defeated everywhere, from Gaza to the West Bank and Jerusalem, and until the right to return of all Palestinian refugees to their original homes, lands, and homeland is implemented.

This fourth anniversary commemoration comes at a time of brutal imperialist invasion and occupation of our Arab homeland. The rapacious nature of imperialism and Zionism and their intentions toward our people is clear in their massacres, oppression and brutality. Abu Ali Mustafa spent his life struggling against these enemies as they sought to liquidate the Palestinian cause and destroy the Arab nation, and today, our people are carrying on and will continue to carry on that tradition of unwavering resistance to imperialist and Zionist attacks and invasions. The Zionists and imperialists believed that by assassinating Abu Ali Mustafa, they could kill his cause and his firm commitment to struggle, but in our continuing resistance, and in the struggle of the Palestinian people and the entire Arab nation, that cause and commitment continue to guide us.

All of his life, Abu Ali Mustafa was a believer in the national unity of the Palestinian people, and in the unity of the Arab nation. He also knew that the Palestinian struggle was inseparable from the international struggle against imperialism. From Venezuela, to the Philippines, to El Salvador, Nicaragua, Haiti, Korea, Cuba, Zimbabwe, Puerto Rico, Colombia, and everywhere in the world the people have risen to struggle against imperialism and for their national liberation, the Palestinian cause stands arm in arm with our sisters and brothers in common struggle against all of our common enemies. Despite the policy of assassination against our leaders and the repression that has attempted to destroy our resistance, we will continue to march where Abu Ali Mustafa marched and we will continue to stand where he stood all of his life. We promise that we will continue to base our struggle on the values he taught. In all of our actions, in our resistance and in our eventual victory and liberation, Abu Ali Mustafa’s legacy of strength, principle, determination and commitment to our people will live on.

This anniversary also comes at a time when a number of initiatives – the so-called “Roadmap,” the “Sharon Plan,” and all other such initatives – are aimed at continuing the war upon our people under a variety of guises. We will not be tricked into abandoning our resistance and our national cause for these plans that continue to devise new ways to attempt to disunite our people and our nation. No matter what name it carries, we will reject any plan that does not recognize the right to return of all Palestinian refugees to their original homes and lands, our national sovereignty and our national independence. Our national rights and our national cause will not be made subject to the latest plans to destroy our resistance and fragment our people. All of his life, Abu Ali Mustafa stood firmly against such plans and schemes, and for our national struggle. His assassination did nothing to kill our resistance or our refusal and rejection of all such schemes and initiatives, and it has only reinforced our determination to continue upon the path that he walked, and upon the path that our people will walk together, of resistance, and of liberation.

Victory to our People

Freedom to all Prisoners

Popular Front for the Liberation of Palestine