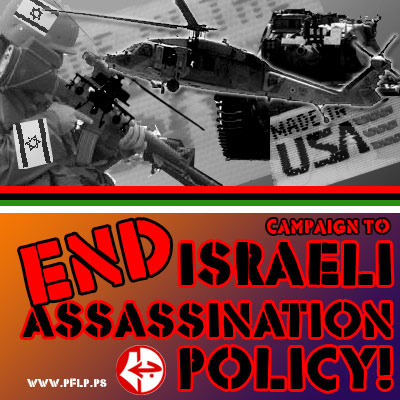 On the seventh anniversary of the assassination of Comrade Leader Abu Ali Mustafa by a U.S.-made occupation missile shot from a U.S.-made helicopter through the window of his office in Ramallah, the Zionist state continues to pursue its policy of assassinations – a policy that reflects and is part of the fundamental character of the state, a colonial settler state determined to eradicate, dispossess and attempt to destroy the Palestinian people and their national movement by any means.

This policy of assassinations has stolen from our people many of our most distinguished leaders – from political leaders, to trade unionists and labor leaders, to writers and cultural exemplars – as well as hundreds upon hundreds of our community activists, local leaders, young people, courageous fighters, student organizers; the sons and daughters of the Palestinian people, targeted for killing by the bullets and missiles of the occupation, bought and paid for by the United States.

From the earliest days of the Zionist project, assassination has always been a mechanism both for depriving the Palestinian people of their leaders and activists, and sending a message to future potential leaders and activists that the path of resistance leads to assassination, and for promoting concessions and collaboration with Zionism as an alternative. Israel has sought to present three alternatives to Palestinians: assassination, imprisonment, or concessions.

Much as Israel relies heavily on its over $3 billion in annual support from the United States, and much as the United States relies on its strategic alliance with the Zionist colonial-settler state in order to extend its influence and present a constant and ever-present threat and settler presence against the Arab nation, Israeli assassinations are financed and armed by the United States. Increasingly, the Israeli assassination policy has relied on U.S.-made missiles shot from U.S.-made helicopters in the sky in order to carry out its deadly policy, that has seen the number of assassinations skyrocket during this Intifada. Over 700 Palestinians have been killed due to the occupation’s assassinations during this Intifada. Every one of these assassinations was paid for by U.S. tax dollars, and it is a responsibility of people in the U.S. to demand an end to the funding of Israel and its assassinations.

It is clear that an end to the policy of assassinations can come only through the power of the resistance making it clear to the occupier that the costs of its policy will be enormous and prohibitive. For example, the response to the assassination of Abu Ali Mustafa by the Front on October 17, 2001, and the killing of the racist Zionist tourism minister Rehavam Ze’evi made a strong statement with clear costs to the occupier of its continued assassinations. Such a response is a necessary and needed action on the part of the resistance, emphasizing that our leaders, activists, our sons and daughters cannot be taken from us, nor can the threat of assassination be held above all of our heads in an attempt to force us into collaboration and concessions.

It is imperative that the eyes of the world must be turned toward these crimes committed by the Zionist enemy. It has been the funds and weaponry of the United States, and the silence and complicity of the so-called international community that has allowed this policy of murder to take place with little recourse, penalty or punishment except for that exacted by the Palestinian resistance for over sixty years. Countless Palestinian and Arab national leaders, cultural workers and activists – from Ghassan Kanafani to Kamal Udwan to Abu Jihad(Khalil al-Wazir) to Fathi Shikaki to Sheikh Ahmad Yassin to Yasser Arafat to Jamal Samhadanah to Imad Mughniyyeh – hundreds upon hundreds of martyrs, killed by guns, bombs and helicopter-fired missiles, tracked by spies and targeted via cell phones – call out for justice and demand an end to the murderous assassination policy.

These assassinations have not only targeted Palestinian and Arab leaders and activists; indeed, they have killed numerous children, passers-by, family members and other Palestinians and Arabs. The Zionists have stopped at nothing to pursue their assassination policy. In July 2002, in an assassination attack against Salah Shehadeh, a Hamas leader, the occupation forces dropped a one-ton bomb in the middle of the most crowded residential neighborhood in Gaza, one of the world’s most crowded locations, killing fourteen others – including children – and destroying apartment buildings. From Ghassan Kanafani’s 17-year-old niece, Lamis, killed by the car bomb planted by the Zionist intelligence agency, the Mossad, to the hundreds of victims in this intifada of missiles fired into cars as they walked down the street or drove in nearby vehicles, the “targeted killings” of the occupation forces have seen all Palestinians and Arabs as acceptable and legitimate targets.

Indeed, the Zionists have even relied on using forged passports and the soil of their Western allies in order to carry out their assassination missions against Palestinians – utilizing forged Canadian, Swedish and other passports and carrying out assassinations in Paris, Rome, Cyprus, and in various states in the Arab world.

Despite clear prohibitions in international law against assassinations and extra-judicial killings, particularly in the Geneva Conventions regarding occupied territories, Israel’s High Court has deemed such assassinations to be acceptable and indeed, they continue unabated. It is necessary that people around the world raise their voices to demand an end to the policy of assassinations – to demand that the international community take action against the occupier state for its ongoing crimes, to demand prosecution of Israel’s war criminal leadership for its ongoing crimes against the Palestinian people, including the assassination policy, to demand Israeli officials be sought for their crimes by the International Criminal Court and arrest warrants be issued around the world for these criminals. It is key that news and media articles and stories be published and broadcast, exposing the brutal and bitter reality of the murderous assassination policy to the world.

Please join us in this campaign. The assassination policy targets Palestinians of all factions and political identities, unified by one key factor – their commitment to the freedom of the Palestinian people and the liberation of Palestine and their refusal to compromise these fundamental principles in exchange for their lives. All of our voices around the world – through legal actions, the courts, parliaments and the public squares of the world, through media broadcasts and news stories, through actions and meetings – must be raised together to demand an end to the policy of assassinations.

Below are several research and human rights documents that should be of assistance in advocacy to end the assassination policy. Please contact us and choose “End Assassinations Campaign” to discuss how we can work together to end this murderous policy and support the Palestinian struggle for liberation!