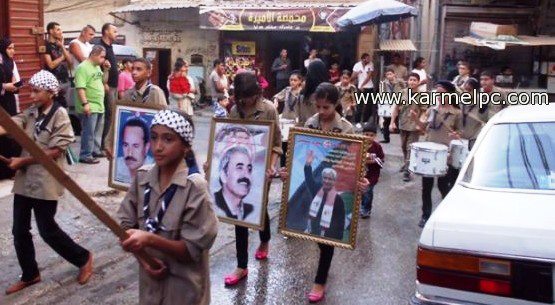 The PFLP in Lebanon held a march in Beddawi refugee camp in northern Lebanon on August 31 to commemorate the 11th anniversary of the assassination of Comrade Abu Ali Mustafa, the General Secretary of the PFLP, who was assassinated by the occupation military forces on August 27, 2001. Comrades from Nahr el-Bared and Beddawi camps participated in the event with representatives from all Palestinian parties and institutions, as well as Lebanese organizations.

The march began at the office of the Front in the camp, led by youth carrying wreaths, flags of Palestine and posters of Abu Ali Mustafa and imprisoned PFLP General Secretary Ahmad Sa’adat, and ended at the martyrs’ cemetery in the camp, where flowers were laid at the tombs of martyrs.

Comrade Fathi Abu Ali, member of the leadership of the Front in northern Lebanon, spoke on behalf of the PFLP, saluting Abu Ali Mustafa’s dedication throughout his life to the return of Palestinian refugees and the liberation of Palestine. “From his earliest days in the Arab Nationalist Movement and the Popular Front for the Liberation of Palestine, he was a man of bold positions, of resistance, and of national unity.” He noted that the Zionist movement had attempted to kill the Front with this assassination, but that the Front’s resistance, its leadership in Ahmad Sa’adat, and the military response and assassination of racist Zionist tourism minister Rehavam Ze’evi made it clear that this would never be the case.