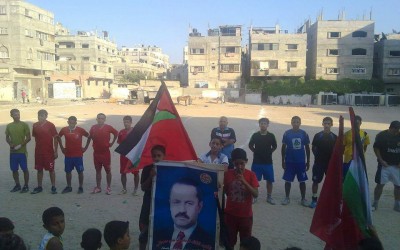 On the twelfth anniversary of the assassination of Comrade Abu Ali Mustafa, the Popular Front for the Liberation of Palestine held a mass rally in Yousef al-Qouqa Square in Gaza City, with a large number of attendees. Comrade Mohammad Toman delivered the central speech of the Front, discussing the legacy of Abu Ali Mustafa, the centrality of resistance and national unity, and the importance of demanding an end to negotiations and working to bring down Oslo. Comrade Ahmad Abu Saud read a letter from imprisoned General Secretary Ahmad Sa’adat, addressing the audience. The Popular Front in Northern Lebanon marked the anniversary of the martyrdom of Comrade Abu Ali Mustafa in Beddawi camp, on August 29, 2013, with a march through the camp including members and supporters of the Front and Palestinian and Lebanese political and social groups from Beddawi and Nahr el-Bared camps. The march launched from the entrance of Beddawi camp to the camp’s memorial to martyrs of the Palestinian revolution, where Comrade Fathi Abu Ali spoke about Abu Ali Mustafa’s legacy, demanding the immediate end to negotiations with the enemy which currently pose the greatest threat to the Palestinian cause. On Sunday, September 1, the PFLP in central Gaza organized a ceremony honouring a number of released prisoners. Comrade Bassam Abu Seif spoke on behalf of the PFLP about Abu Ali Mustafa’s legacy of struggle and in particular his emphasis on confronting and ending the Oslo approach, noting that Oslo has been the cause of division, corruption and fragmentation, and saying that the movement to bring down Oslo is the key to unity and mobilization of the energies of the resistance. He aslso raised the US threats to attack Syria and strongly condemned Western aggression against Syria, saying it would only benefit the Zionist enemy, calling for a political solution for the Syrian crisis. Former prisoner Yousef Abdel-Al spoke about the struggle of prisoners in Zionist jails, urging international action for the prisoners, including bringigng Zionist offcials before intrnational courts. The event honoured released prisoners Mohammed Nasheibat, Yousef Abdel-Al, Ayman abu Sitta, Ahmed Uwaini, and Salameh Musleh. On August 31, the PFLP in Ain el-Hilweh camp visited the martyrs’ cemetery in the camp and laid a wreath of roses. Comrade Dr. Talal Abu Janous spoke at the ceremony, urging activating the resistance to end division in order to achieve the right of return and the establishment of the Palestinian state on the entire national soil from river to the sea.