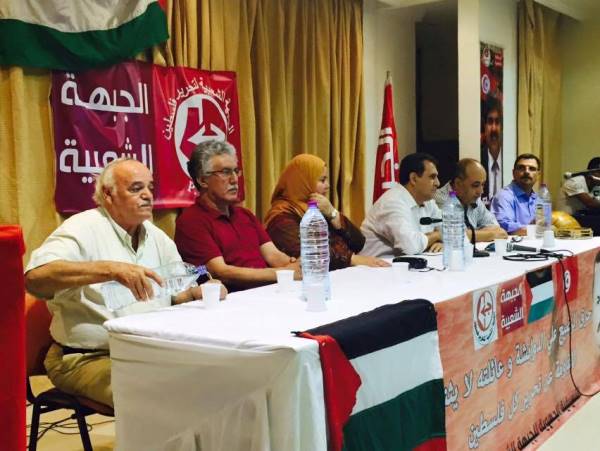 The Popular Front of Tunisia marked the anniversary of Palestinian, Arab and international leader Abu Ali Mustafa’s assassination with an event in Tunis, attended by Palestinian and Tunisian comrades as well as the Venezuelan Ambassador to Tunisia.

Speakers at the event included Comrade Hamma Hammami, the spokesperson of the Popular Front of Tunisia, Comrade Mbarka Brahmi, member of the People’s Assembly and the widow of Mohammed Brahmi and Comrade Abu Amal, the representative of the Popular Front for the Liberation of Palestine in Tunisia.

The speakers urged the building of a comprehensive Arab popular front based on the values of resistance and liberation, as a political lever to restore the Arab national liberation project, confront the Zionist colonial project, imperialism, and its tools and puppets in the region. They also emphasized the necessity of taking the strategic path of resistance by all means to liberate Palestine.

Comrade Abu Amal of the PFLP spoke about the life of Abu Ali Mustafa and his involvement in critical confrontations of Zionism and imperialism, as well as the current situation in Palestine and the necessity of unity and resistance to achieve victory for the Palestinian people.

He also addressed the disastrous manifestations of the path of Oslo and negotiations, and the great damage this has caused on the ground in Palestine amid continuous Zionist aggression, killing, displacement and arrests.

Comrade Mbarka Brahmi called on the Popular Front in Tunisia and the PFLP to take initiative and form the nucleus of a popular liberation project to unite all Arab forces for resistance, liberation and social justice. She also identified the Abu Ali Mustafa Brigades, the armed wing of the PFLP, as the battalions of resistance of the Arab liberation front, saying that alongside it, all of the brigades of resistance fight against imperialism, colonialism, capitalism and Zionism and for freedom and justice, rather than randomly resorting to violence to resolve internal contradictions.

Brahmi said, “We salute the memory of the martyrdom of the Arab national leader, Abu Ali Mustafa, who always rose to confront the Zionist enemy and global imperialism. He put our higher values into practice…the martyrdom of Abu Ali Mustafa meant his transformation into the immortal leader of the Abu Ali Mustafa Brigades, who struggle heroically against the Zionist enemy and its leaders, and will continue to do so as long as a single occupying soldier remains on the land of Palestine. They are faithful to the message of their teacher. The Abu Ali Mustafa Brigades are resisting in the trenches, not in hotels; they stand to defend their nation against colonialism and Zionism, reactionary forces and collaborators….”

“The anniversary of the martyrdom of Abu Ali Mustafa comes under extremely difficult conditions for the Arab nation, from the Atlantic to the Gulf…imperialist countries and groups that serve its project are attempting to divide the Arab nation on religious and ethnic sectarian grounds, with a view toward ending its objective existence,” said Brahmi.

Brahmi explained that the forces of aggression and their agents, inside and outside, have become unified in their methods and means and objectives, waging a relentless war on our people and our history, noting that this must compel the progressive Arab forces to form a unified Arab popular front to unite the struggles of our people from the Atlantic to the Gulf and expand the circle of resistance, so that resistance forces are not isolated islands – “We will not find victory without a unified resistance on all levels: political, social, cultural, media and military.”

Brahmi said that this front must also be a comprehensive site of armed resistance against the Zionist aggression and against takfiri terrorist forces, to support social and cultural projects and the steadfastness of the Arab people. This Arab popular front, she argued, must be a basis of comprehensive resistance for the Arab liberation movement to regain its vitality for future generations. This front, she argued, includes the Abu Ali Mustafa Brigades, and all of those who have chosen the path of resistance and the trenches of struggle, and who have paid in blood, from the Atlantic to the Gulf. “Let us follow in the path of the courageous leaders, Abu Ali Mustafa, Chokri Belaid and Mohammed Brahmi, through extraordinary work,” said Brahmi.

At the end of her speech, Brahmi sent greetings to the martyrs of the Arab nation, and paid tribute to the resistance and freedom for all prisoners in Palestine, led by comrade Ahmed Saadat, the imprisoned general secretary of the PFLP.

In his talk, Hamma Hammami lamented the decline in public attention to the centrality of the Palestinian cause, not only in Tunisia, but throughout the Arab nation, noting the preoccupation of most Arab and progressive forces with internal issues. “These concerns should not prevent our attention to critical national issues, particularly the Palestinian cause,” he said.

He noted that the struggle in Tunisia is linked to the Palestinian struggle, saying that the Arab world is living through a new phase in all locations, and that this phase is the most dangerous since the era of Sykes-Picot. He argued that this is a reaction to the popular uprisings and social movements in the region, attempting to block revolutions for freedom, independence, progress and social justice and force them into a framework of sectarian ethnic and religious conflicts, in order to leave the Arab nation open to exploitation by Zionist colonialism and Western imperialism.

“The Arab people are able to overcome this present situation into a struggle for liberation and independence, democracy and progress, provided that the national progressive forces are ready for the battle,” he said. 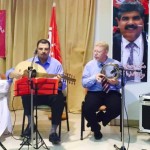 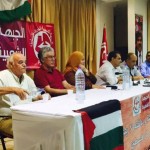 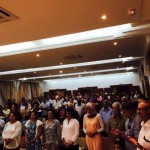