Abu Ali Mustafa: A life in struggle for the liberation of Palestine 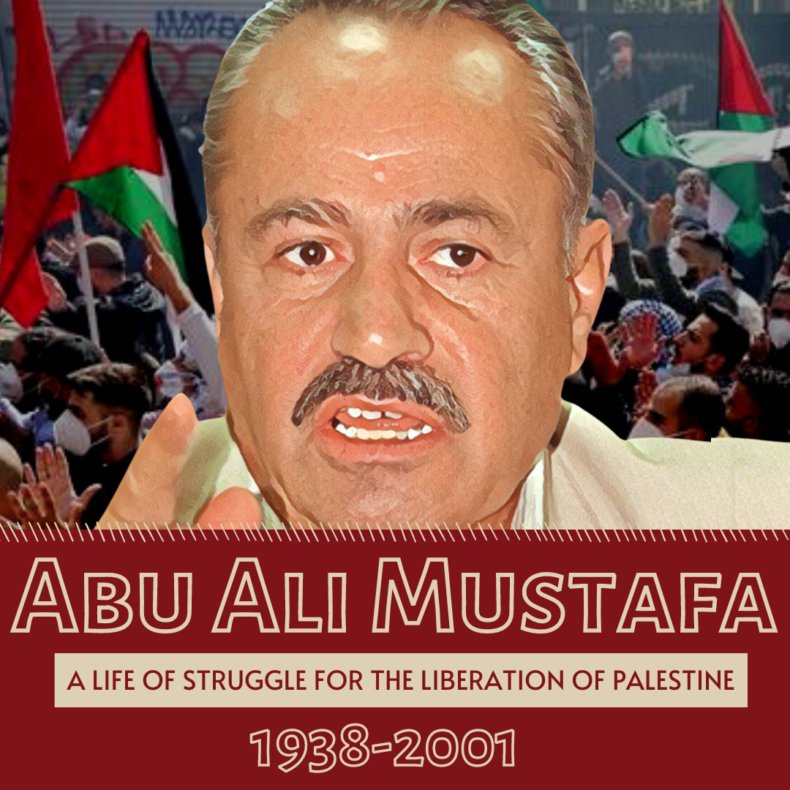 Abu Ali Mustafa: A life in struggle for the liberation of Palestine

The 21st anniversary of the martyrdom of Abu Ali Mustafa

This Saturday 27 August we mark 21 years since the martyrdom of Abu Ali Mustafa, the General Secretary of the Popular Front for the Liberation of Palestine, targeted for an Israeli assassination raid with a U.S-made and -provided missile in occupied Al-Bireh, Palestine, in 2001.

As Samidoun Palestinian Prisoner Solidarity Network, we remember and honor Abu Ali Mustafa’s legacy as a popular and revolutionary leader of the Palestinian liberation movement, a principled struggler who organized, upheld and defended the Palestinian resistance and the Palestinian people until his last breath.

Abu Ali was born in 1938 in Arraba, Jenin, Palestine. At the age of 17, he joined the Arab Nationalist Movement, the Arab liberation movement founded by Al-Hakim, Dr. George Habash, Wadie Haddad, Abu Maher al-Yamani, Basil al-Kubaisi, Ahmad al-Khatib, Hani al-Hindi and their comrades. He played a leading role in the Arab Nationalist Movement in the 1950s and 1960s and confronted the repression of the Jordanian regime, which banned political parties; in fact, he was arrested and imprisoned for five years in Jordanian prison, sentenced by a military court for his organizing. Throughout his life in struggle, he consistently upheld the centrality of the liberation of the political prisoners from Zionist, imperialist and reactionary regime prisons.

The PFLP prison branch issued a statement from behind Zionist bars connecting the anniversary to the struggle taking place inside the prisons today:

“The 21st anniversary of the martyrdom of the leader Abu Ali Mustafa comes at a sensitive moment in the history of our people, in which the Zionist enemy continues its comprehensive war against our people. It comes at a shameful moment for the normalizing Arab reactionary forces in a U.S. plot against our people and our cause. These aggressions and schemes are being met with steadfastness and resistance, and amid this battle, the prisoners are confronting the so-called ‘Prison Authority’ with legendary steadfastness, to teach it lesson after lesson despite all of the forms of oppression and abuse, the confiscation of the prisoners’ rights and the barest necessities of life…In your memory, Abu Ali, we raise our fists in the face of the occupier, announcing the continuation of our resistance. We raise our fists as a greeting from Palestine to all Palestinian, Arab and international resisters. We raise our fists in salute to the masses of our people who are united with the resistance.”

After his release from Jordanian prison in 1961, Abu Ali continued to work with the Arab Nationalist Movement. He became responsible for the northern district of the West Bank of Palestine before joining with Habash and his comrades in co-founding the Popular Front for the Liberation of Palestine. The founding of the PFLP followed al-Naksa in 1967, the occupation of the remainder of Palestine as well as the Syrian Golan Heights and the Egyptian Sinai.

Abu Ali Mustafa played a key role within the PFLP and, thus, within the Palestinian revolutionary movement as a whole. He was renowned for his humbleness, sincerity and dedication; he did not like to be the center of attention. Amid his dedication to establishing the underground organizations of the Front, he consistently listened to his comrades and, indeed, the Palestinian people, sharing their experiences and ideas in order to deepen his understanding and leadership.

“Abu Ali Mustafa treated the Popular Front as his ‘daily workshop’ that does not rest and does not sleep. […] Abu Ali Mustafa was not only fighting for the rights of his people to liberation and return, but he was equally as strongly building the revolutionary tools that could create the act of liberation and help people to extract their confiscated rights: from the women’s institutions to the youth organizations, to the institutions for students, workers and charity, and for military action. These tools are the vehicles of revolutionary organization.”

Upon his return to the occupied West Bank of Palestine in 1999, Abu Ali Mustafa stated: “We return to the homeland to resist, not to compromise.” It was this commitment to resistance, including the armed resistance, that led the occupation to plan for his assassination. The occupation viewed his role as a principled national leader as a threat to its continued military domination throughout occupied Palestine, as well as to the Oslo so-called “peace process” and the “Palestinian Authority” acting as a subcontractor for the occupier..

On 27 August 2001, only two years after his return to Palestine, Abu Ali Mustafa was killed by occupation forces firing two missiles, produced and provided by the United States, into his office in occupied Al-Bireh. His martyrdom was saluted by over 50,000 people attending Abu Ali’s funeral.

As a response to the targeted assassination of Abu Ali Mustafa, the PFLP targeted the notoriously racist Zionist tourism minister Rehavam Ze’evi several weeks later on 17 October. Ze’evi was widely known for his demands for the complete ethnic cleansing of Palestine. This response sent a clear message from the Palestinian resistance – that the Israeli assassination policy would not be tolerated and that an assassination of Palestinian leaders would be met with an equal response.

Abu Ali Mustafa was known throughout his life as an organizer and a builder of organizations. Thus, it is appropriate that many institutions have been named to honor him after his martyrdom, from schools and sports clubs to the armed wing of the Popular Front, reflecting his wide-ranging legacy in the Palestinian liberation struggle.

This legacy lives on in the Palestinian, Arab and international revolutionary organizations and movements, and the people, always his compass, who continue to struggle for the liberation of Palestine from the river to the sea, for the return of the refugees, for the defeat of Zionism. These strugglers lead and fight so heroically from behind bars, under siege and in exile, despite all the internal and external difficulties that are being imposed upon them, confronting the forces of imperialism, Zionism and Arab reaction, as Abu Ali Mustafa did throughout his life.

He said: “We are all targets as soon as we start mobilizing. We do our best to avoid their weapons but we live under the brutal Zionist occupation of our lands and their army is only a few meters away from us…We have a job to do, and nothing will stop us.”

Today, Palestinian prisoners are engaged in a collective struggle behind bars, putting their bodies and lives on the line for justice and liberation, on hunger strike and in resistance. The assassination policy that targeted Abu Ali Mustafa, with the armament and backing of the imperialist powers, continues today, aiming to deprive the Palestinian people of their beloved leaders and courageous fighters, even as the resistance grows. The legacy of Abu Ali Mustafa must inspire us all to action: to support the prisoners in their struggle, to fight back against imperialism, and to organize to bring an end to the assassination policy. Most fundamentally, Abu Ali Mustafa, a truly revolutionary Palestinian national leader, firmly upheld the Palestinian and Arab resistance, making clear that the people say “No” to normalization and negotiations, their eyes fixed on return and liberation.