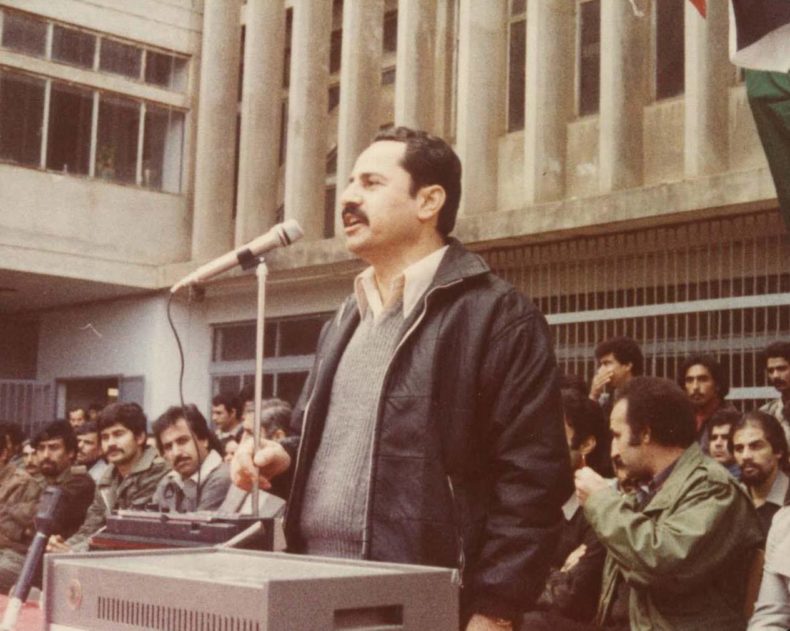 For the second year in a row, the Jordanian regime has forbidden a community and cultural event to honor the slain Palestinian leader Abu Ali Mustafa on the 17th anniversary of his assassination by Israeli occupation forces with U.S.-made and -funded weaponry.

The event was scheduled to take place on Wednesday, 29 August at the office of the Wihda Party (the Popular Democratic Unity Party), in the party office’s courtyard. The governor of Amman has issued an order preventing the event, and the Wihda Party has called an urgent meeting to take place this evening to determine how to proceed in light of these events.

When Abu Ali Mustafa was assassinated by the Israeli occupation, he was the General Secretary of the Popular Front for the Liberation of Palestine after dedicating his life to the Palestinian and Arab revolutionary movement. During his years of struggle, he was imprisoned on multiple occasions and spent spent years in Jordanian prison after he was arrested in 1957 for his membership in the Arab Nationalist Movement after political parties were banned in Jordan.

Throughout his life, Abu Ali Mustafa recognized the nature of the Jordanian regime. As Khaled Barakat wrote in “The Lessons of the Revolutionary Worker“:

“As for the Jordanian regime, he considered it a reactionary power and an agent of colonial powers. He believed that this regime had specific functions: protecting the Israeli occupation in order to preserve the power of the ruling class and the authority of the financial tycoons of Jordan, and that this regime will continue to work for a peace deal with Israel along the lines of the Sadat approach…Of course, Comrade Abu Ali did not expect in his worst nightmares that the leadership of the PLO would sign agreements with Israel and ‘precede’ the Jordanian regime, albeit in a formal and public sense. But this step did not break the spirit of will in this stubborn revolutionary worker…”

In 1980, Abu Ali Mustafa engaged in an extensive interview about the situation in Jordan at that time with the PFLP’s Arabic-language journal, Al-Hadaf. A translated version of the interview was also published in the English-language PFLP Bulletin of February 1980.

In light of the fact that Abu Ali Mustafa’s vision, goals and message, 17 years after his criminal assassination, remain so threatening to the Jordanian regime – engaged in deep and intensifying collaboration with the Israeli state, including a project for the sale of stolen Palestinian gas that has received widespread protest – that a simple commemorative event has now been banned for two consecutive years, we highlight this interview, 38 years later. While a number of specific conditions have changed in the ensuing years, the overall truth, accuracy and clarity of his analysis continues to shine through today.

Some quotes from the interview include the following:

“However, we do not see the Jordanian regime preparing for a joint confrontation against the Zionist enemy, in spite of the fact that the Zionist enemy is a continual threat. On the contrary, this regime continues to aid the enemy by closing its borders to the resistance movement. This is a historical characteristic of the regime since the 1920’s. If we examine the common factors between the Zionist enemy and the Jordanian regime – killing, torture and expulsion against those patriots who oppose them – we can see that the common denominator upon which they agree is opposing the Revolution and the patriotic masses.”

“In view of the regime’s growing crisis and the masses’ rising consciousness, it is our task to encourage our masses to employ all forms of class and national struggle in order to advance. This is the ·only course for our Revolution to gain a secure base – liberated and progressive – for confronting the enemy and liberating our masses from the oppressive bourgeois regime in Jordan. Day by day the danger of the relation between the PLO and the Jordanian regime is becoming clearer. In the interests of continuing the march of the revolution, it is our duty to alert the PLO leadership of this danger and the increasing role of the regime in preparation for the coming stage of the capitulationist path.”

“Every day news comes out of mass arrests of Palestinian militants in Jordan. The most recent campaign was the detention of 13 militants, charged with attempting to cross the border to ‘Israel’. What about opposing Camp David, while supptessing student demonstrations at Amman and Yarmouk universities, condemning the March ’79 agreement? Or the expulsion of students and unjust trials and imprisonment of others for as much as ten years for demonstrating against the Camp David agreements? The danger culminates when these policies are allowed to continue unchallenged, out of consideration for preserving the relation between the PLO and this regime.”

“From its establishment, the regime in Jordan was a gendarme in the hands of the British, to strike the Palestinian movement and protect the colonial routes and interests, as well as to suppress the masses in Jordan. The regime aided colonialism in executing the Balfour Declaration. One of its first ventures into other countries was sending army units against the revolution of Rasheed Ali Al-Kilani in Iraq in the early forties….Starting with the battles at the end of ’68 to take the pulse of the Resistance, and continuing in the fierce battles of 1970-71, the efforts of the regime were tenfold those exerted against the Zionist enemy over thirty years.”

“These two-slogans – political freedom and the right of armed mass struggle against the Zionist enemy – cannot be separated, or compromised. In the present situation, we consider these as the minimum slogans which can rally all the classes, afflicted by the oppression of the regime, against the Zionist enemy. In conclusion, I would like to praise the role of our masses in Jordan and our struggling comrades, those inside and out of jail. It is their consciousness and perseverance which paves the road of our justified optimism in the masses’ victory.”