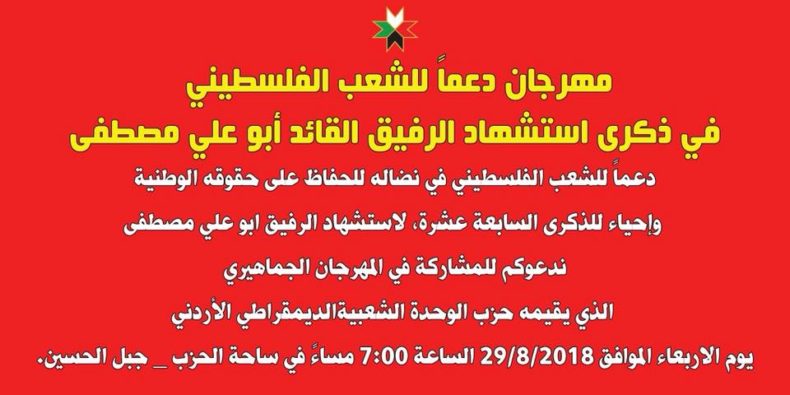 The Popular Democratic Unity Party (Wihda Party) announced that despite the ban issued by the governor of Amman forbidding its commemoration of the 17th anniversary of the assassination of Abu Ali Mustafa, the event will go forward as scheduled.

“In the context of the defense of public freedoms and commitment to the national rights of the Palestinian people, the victory of the resistance and the blood of the martyrs, the political bureau of the Jordanian Popular Democratic Unity Party confirms that the event scheduled will take place at the party headquarters.”

The event is scheduled to convene at 7:00 pm tonight, Wednesday, 29 August at the Wihda Party office in Amman. It honors Abu Ali Mustafa, the assassinated General Secretary of the Popular Front for the Liberation of Palestine, who was killed by the Israeli occupation forces on 27 August 2001 with a U.S.-made and -funded helicopter-fired missile as he worked in his office in Ramallah.

This is the second year that the Amman governor has issued an order forbidding the commemoration of the annual Abu Ali Mustafa memorial and commemorative event. The Wihda Party’s political bureau met in an emergency meeting on Tuesday night to announce the party’s rejection of the ban and commitment to moving forward with the event.